(Above: here's how to do defiance)


Faced with the prospect of watching the Bolter do his report on Sunday morning television, it should go without saying that the pond would prefer to do the proper biblical thing, and tear out an offending eye or two ...

It always astonishes the pond that some 130k Australians waste their time on a Sunday morning taking a look at the Bolter lathering himself up into a fury.

Haven't they heard of a good cup of chocolate, or sex, or trimming toenails?

On the other hand, the fact that at least 22 million or so people manage to avoid the show is quite reassuring.

Who'd have thought the pond would be in such a majority? Dreams of being an existential outsider up there with Jack Keroauc will have to take a rest ...

But enough of the Bolter, at least until the ratings come in and we can note for the umpteenth time, how the Bolter is helping drag network Ten towards Sunday oblivion, because today is meditative Sunday, and today is the day that Cardinal Pell enjoys his new position at the top of the digital front page of the Sunday Terror amongst the rest of the crony commentariat: 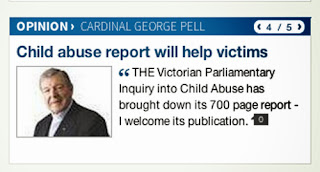 Now it will be remembered by anyone except Pell, who suffers from short and long term memory loss, that the inquiry wasn't flattering about Pell.

Even the reptiles at the lizard Oz, running AAP coverage, couldn't hide it in Abuse inquiry puts Cardinal George Pell in spotlight:

The  Catholic Church's "institutional failure" to respond appropriately to child abuse extends from parish priests to its leader in Australia, Cardinal George Pell.
The Victorian parliamentary inquiry into child abuse took Cardinal Pell to task in its report over his attempt to separate the church as a whole from the actions of senior religious figures it said had "minimalised and trivialised" the issue.

And so on and so forth. Any decent CEO, confronted by this charge of mismanagement, would have fallen on their sword and departed the scene.

But the Pellists are made of sterner stuff, and the big guns were wheeled in, most notably PM Tony "gunboat diplomat, climate science is crap" Abbott himself, as you can read in Tony Abbott defends George Pell after criticism from child abuse inquiry.

Freedom characterizes properly human acts. It makes the human being responsible for acts of which he is the voluntary agent. His deliberate acts properly belong to him. (more Catechism for hims, here, women need not apply).

Well it's water off a duck's back, and all you need to do is publish a piece in the Sunday Terror, saying how you welcome the publication of the report.

Because it will help the victims (Child abuse report will help victims, behind the paywall because you have to pay to read about Pell's indifference).

But then it gets even weirder:

While the Inquiry hearings were sometimes unconventional and emotional affairs, the report itself seems fair and reasonable. Naturally it covers the awful abuse which occurred in Catholic communities, mainly between 1960 and 1985.
The report details some of the serious failures in the way the church dealt with these crimes and responded to victims, especially before the procedural reforms of the mid 1990s. Irreparable damage has been caused.
By the standards of common decency and by today's standards, church authorities were not only slow to deal with the abuse, but sometimes did not deal with it in any appropriate way at all. This is indefensible.

It's astonishingly cheeky isn't it? First the naked attempt to stonewall and to quarantine, and to set it all back before 1985. And then the hint that all was on the way to being fixed by the mid 1990s. As if the dissembling and coverups haven't continued to this very day ...

And here's a man personally noted as having helped trivialise and minimalise the issue, coming out and saying irreparable damage has been caused, and characterising the conduct of the Catholic hierarchy as indefensible, and then without so much as a how's your father or a Hail Mary, blithely going on his way ...

Because, you see, it's nothing to do with him:

The Melbourne Response and Towards Healing have never minimised or trivialised the problem. The church is committed to making improvements wherever possible and to following the law at all times.

Yep, I welcome the report, but I'm still in denial, routinely asserting that this helpful report actually got it fundamentally wrong.

I am totally committed to improving the situation; I know the Holy Father is too. There are significant persons in the community who believe, rightly, that we have failed, but we have done quite a bit.

Okay, let's see how that "quite a bit" unfolds in the last couple of lines:

I commit myself to doing whatever further is required. Unfortunately this Inquiry only examined non-government institutions, which will be safer places after the recommendations are implemented.

So will all non-religious organisations after the Royal Commission has examined institutions across the board.

What's this blather about all non-religious organisations? It sounds like Pell wants to uncover all sorts of abuse across the board, simply so he can say, nah, nah, it wasn't just us, others were doing it too...

Which for an ostensible Christian is the most risible and pathetic form of defence imaginable.

In those days Hezekiah became sick and was at the point of death. And Isaiah the prophet the son of Amoz came to him and said to him, “Thus says the Lord, ‘Set your house in order, for you shall die; you shall not recover.’” (2 Kings 20:1)

Put it another way. Set your own bloody house in order, and don't worry about other houses.

Repay no one evil for evil, but give thought to do what is honorable in the sight of all. If possible, so far as it depends on you, live peaceably with all. Beloved, never avenge yourselves, but leave it to the wrath of God, for it is written, “Vengeance is mine, I will repay, says the Lord.” To the contrary, “if your enemy is hungry, feed him; if he is thirsty, give him something to drink; for by so doing you will heap burning coals on his head.” Do not be overcome by evil, but overcome evil with good. (Romans 12:17-21)

And so on and so forth on this meditative Sunday ...

Which happily leaves the pond very little time to think about the once pugnacious Sydney Anglicans, now cast out into twilight zone, far removed from the bright light of the Sunday Terror and the crony commentariat...

Which is just as well, because the Sydney Anglicans have gone strangely quiet. Jensen's bit about Christ being the wimp that won is still up on the page, and so is David Mansfield rabbiting on about the Melbourne Cup being for mugs.

Sheesh, the cup was run on November 5th and here we are on the 17th. Since then a woman has died, hundreds have been poisoned from a salmonella outbreak, here, forced video at end of link, and trainer Gai Waterhouse has copped a $2,000 fine for the race-day treatment of Melbourne cup runner Tres Blue, here, and the Anglicans are still wondering if the Cup is for mugs ...

Every Sunday the Pellists now bask in the glory of the Sunday Terror, nestling cheek by jowel with the crème de la crème of the crony commentariat ...

But will the Pellists ever tackle the hard issues? Incorporating the church, making celibacy voluntary, smashing the madonna myth and making room for women?

In your dreams, or perhaps in Abuse cover-ups perpetuated priestly mystique, or in Celibacy a factor in some cases, says Pell (forced video at end of link). 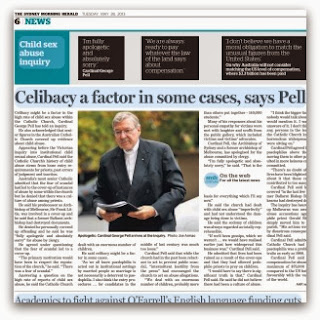