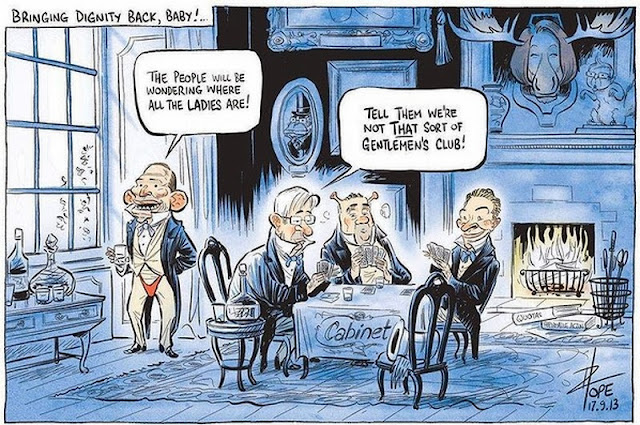 (Above: phew, we need to start off with a joke today from the most excellent Pope - more Popery here - before we plunge into a world of narcissist self-obsession)


The pond has been ticking off the commentariat who furtively got together for a chow down with dear leader, and what do you know, good old prattling Polonius, known to others as Gerard Henderson, has a clean bill of health.

Fairfax columnist Paul Sheehan was present, but fellow Fairfax contributor Gerard Henderson, who was believed to have been invited, was not. (here)

Good on him, and yet, and yet, if you read Henderson's Media Watch Dog, issue no 206, 1 November 2013, special "All Saints' Day edition", available free for your pleasure and indulgence here, the tone is more than passing weird ...

Compare and contrast the frothing and the foaming with the much duller outing in today's Fairfax:

But go on, read Julian Assange, Edward Snowden hypocrites over Vladimir Putin, Ecuador, and then go back to the newsletter.

You'll surely have a strange case of Dr Jekyll Henderson and Mr Hyde moment or three, or perhaps a Dorian Gray moment, with the newsletter the real painting.

There you'll see the peculiar sight of a man pretending to be a dog, and abusing La Tingle and getting agitated about "oleaginous" (a word we're assured they don't use in Penrith), and dishing out praise for an "in fine form" Murdoch, while socking it, in a peculiarly childish way, to the likes of Robert Manne, Phillip Adams, Wendy Bacon, David McKnight and Paul Barry.

Presumably the addled brain of the dog, or its owner, thinks this passes as stunning satire:

Paul (“Have you heard about my book on Murdoch?”) Barry: I would have loved to support the Lone Protestor on George Street last night. But, unfortunately, I was busy at my new gig at the taxpayer funded public broadcaster preparing for next Monday’s Media Watch on ABC 1. I plan to present yet another account of how News Corp’s The Australian, Courier-Mail, Herald Sun and Daily Telegraph have destroyed my adopted country and made possible the coup by the Murdoch-Pell-Abbott Clerical Dictatorship that we call contemporary Australia. Now, mind you, I am a fair and balanced presenter on the ABC because [Continues for 69 pages].

Yep, it's about as funny as a boy dipping pigtails into an ink well, or pulling wings off a fly.

But never mind the preposterous Hyde tone, note how you'll never read this sort of nonsense in the dullard Polonius Fairfax pages.

And so on it goes.

In the next piece, the dog assaults "The Guardian on the Yarra", which seems to be the dog's witty variant on "Pravda on the Yarra", and which serves as notice of extended abuse of anyone who dares to propose that action on climate change might not be in the very best of hands with Tony "the argument is crap" Abbott, and Greg "wikipedia tells me all I need to know" Hunt.

That's where it gets beyond the bizarrely petulant and childish. Somehow the dog seems to think it's scored a major triumph by mocking Adam Bandt for daring to nurse a drink and look out at the view from Bar Lui, at the top of the Rialto:

So there you have it. The Age’s Mary O’Brien did not query why the well- remunerated Adam Bandt believes it is appropriate to sit for some hours in Bar Lui over one drink. Just one. But this is The Age – which has scant regard for business – large or small.

Beyond the valley of the weird or what?

Just one drink is the problem? So he should have scoffed a dozen, got as pissed as a parrot, and got into a fist fight, like a real Australian man ... or dog?

Then there's abuse of Maxine McKew for appearing in a piece with foolish foodie snobbery, since we all know that Polonius's preferred meal is gruel, and forget the sugar.

What do you think he is, some kind of toffy bloody ponce? He's a western suburbs man, and each day he works in the heart of Sydney is another day of endless suffering, kept far distant from the fine dining at the Penrith Panthers.

Then there's ongoing abuse of Peter Munro for his English-language skills, and astonishingly infantile abuse of Scott Burchill for daring to wear a "black mullah-chic shirt".

You really can't let this dog out and about without it ravaging the ankle of Mark Scott and Michael Millett at the ABC, which is naturally a "Conservative Free Zone".

It seems because Tony Abbott says the ABC has a "view of the world", the ABC is a CFZ, because after all, anything Tony Abbott says must totally be true, as his acolyte scribbles down every word and turns them into a vision worthy of Abraham - all the more so because Ms Vanstone is just a token:

The fact remains that the ABC does not employ one conservative presenter or producer or editor for any of its TV or radio or online outlets. Not one. Can you bear it?

It's clear that in alter ego mode, Polonius is barking mad, frothing and foaming, and smiting mightily at his enemies, as he continues on to take out James Valentine, Jonathan Green and Geraldine Doogue. No wonder he's been driven mad, it seems he listens to the ABC all the time ...

But the most epic and bizarre section surely involves the correspondence between one Gerard Henderson, who forsakes being a dog, and David Marr about Tony Abbott, B. A. Santamaria, Pell and the whole damn thing, which even Marr seems to understand constitute a set of "bizarre" exchanges.

Even the dog itself allows in one response that it is in receipt of a "somewhat strange" email.

It quickly becomes clear that you can't have a debate with the dog or its owner,

What is also clear is that Polonius is completely up himself, as he lists three of his works as complete and indisputable proof he knows everything:

All three works were considered and reflective critiques of B. A. Santamaria. They were not the work of a “Santamarite”. The fact is that you lack the intellectual grounding in this area to even be aware of what you do not know.

Weird? Beyond the valley of the megalomaniac ...

Can it get any sicker or weirder? Why yes it can, because it turns out the dog reads Virginia Trioli's tweets, and next thing you know the pair are exchanging lines like vaudeville stars, and the dog makes jokes about black shirts, and humbly disparages himself for refusing to be an attention-seeker.

Why, the dog, or the man, is a rampant attention-seeker, and his correspondence with Trioli is reminiscent of one of the more desperate letter writers to Fairfax desperately seeking attention. As for the wit?

Good afternoon Virginia
I refer to your (early morning) email. If you were a man, you might be labelled – wait-for-it – Jesuitical.

Weird, or what? Like a serial stalker, or a serial pest ...

It gets odder and odder, and ends this way:

As to attention seeking. Are you the same La Trioli who went on and on about your new glasses? And is the verballer the very same Young Mr Rowland who dressed up for Pirates Day? All on ABC News Breakfast. Can this be so?

Barking mad, and it suddenly dawned on the pond that the dog, and/or its owner, was showing all the signs of codependency.

The dog, and/or its owner, had been driven mad by consuming too much of the ABC, and now blathered on about glasses and dressing up for Pirates Day, without having the first clue or notion of what this might reveal about the blatherer ...

It's as serious a case of a parading ego, or egosurfing (vanity searching, self-googling, call it what you will) as the pond has ever encountered.

It's not just a few quotes, it's dozens of them, and by the end of them, many will revert to Mike Carlton's astute insight:

“I think Henderson is seriously ill. There’s enough there for an entire convention of psychiatrists.” - Mike (“I’ll pour the gin”) Carlton (after Pre-Dinner Drinks tweet to Jeff Sparrow), 8 October 2013

As for prattling Polonius and his dull "Clark Kent" piece about Assange and Snowden in today's paper, it's most assuredly ponderous and pompous in the usual way, while peddling all the usual memes for those who favour endless spying by governments on their own citizens and the citizens of other nations.

The witty Superman, caped ABC crusader, with faster satirical thrusts than a speeding bullet, has been tucked into the cupboard, with the dog.

You see, Assange is a self-deluded pious hypocrite for staying in the Ecuador embassy, but sssh, not a word about the stench arising from assorted matters arising from various wikileaks.

And ditto, The Guardian is bad, and Edward Snowden awful for being a guest of Vladimir Putin's government - no doubt Polonius will be leading the boycott of the Olympics down under, with the Sydney Institute at the forefront of an astonishing campaign designed to destroy them while celebrating gay rights (if you see this happening, please let the pond know, and we'll give Ripley a call).

But sssh, not a word about spying on people - you see if China does it, as it does in relation to internet abuse, it's a shocking abuse of human rights and liberties - oh yes it is, it is - but if the United States does it, it seems it's perfectly okay, and hunky dory with Polonius. And if Australia does it to Indonesia, heck, it's what spies are for ...

Anyone who draws attention to this peculiar double standard, it seems, must be be a hypocrite and a lickspittle fellow traveller, because all you see in a bifocal world is black and white, or sometimes white and black, and invariably the left intelligentsia:

It is unlikely Snowden and Assange will bother too much about Parker's criticisms. Yet Assange in London and Snowden in Moscow benefit from the intelligence they are intent on undermining.
Like Assange, Snowden has considerable support among the left intelligentsia.

Yep, damn you United States libertarians, damn you for being so much like the left intelligentsia ...

Now there's a man who seems to have lost his dog, and is now safely stuck back in the 1950s and the B. A. Santamaria world view. Click his heels three times and he might even end up in Kansas.

But then it dawned on the pond that there might be a serious case of codependency at work here.

If the pond looks at Henderson while Henderson examines his navel for signs of fluff from his chic new black suit, surely there's enough there for an entire convention of shrinks ...

(Below: phew, time for another cartoon, there's too much madness in the air. Oh dear, the madness is infectious, as Rowe clearly shows. More Rowe here. But really Mr Rowe, you should have worked out a way to put Hendo in the picture). 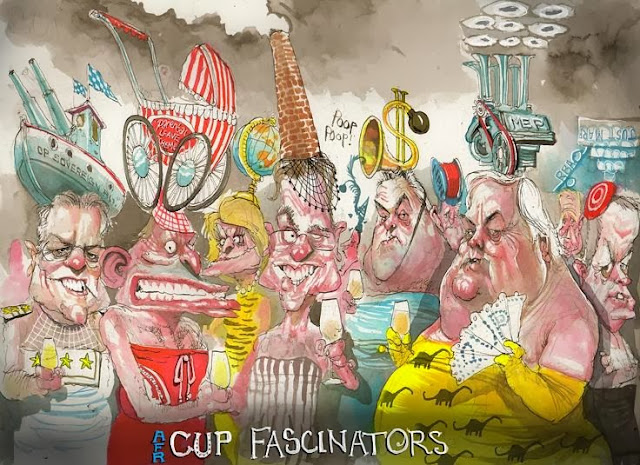