Simon Caterson, and how Collingwood helps reveal the truth about the saintly Cardinal Newman ... (Above: Cardinal Newman. In his library or in the closet? Here).
My partner has advised the following irrefutable theological theorems:
if Collingwood wins the grand final, there is no god;
alternatively, if Collingwood wins the grand final, and there is a god, she is definitively the bitch from hell, a lickspittle lackey of Eddie McGuire, a vicious wanton harpie, addicted to cheap commercial television game shows, a spoilsport, a grump, a ne'er do well, a fickle, tearing 'wings from flies' harridan whose sole purpose, apart from creating the universe, is to torment humanity, a damned vile creature intent on creating hell on earth before consigning humanity to hell for an eternity spent watching Collingwood win grand finals.
alternatively, if Collingwood loses, this is clear undeniable proof that stout hearted St Kilda folk have been put on earth to refute the pernicious belief that a god exists, especially a devious god who would back Collingwood to win a grand final; or worse, that if there is such a perverse god, she is satan's spawn, since she devised fiendish and cunning means for Collingwood to get into the grand final by defeating Geelong, before her wiles were defeated by stout hearted St Kilda folk. She is therefore by definition a lesser god in the pantheon, to be denounced each Sunday.
When I suggested the patriarchy and the male god that's been put in charge of things should take the rap, there was a storming and thunder and tears, and a lost soul wandering into the distance muttering that there were only two choices: atheism or devil worship.
At times I fear for the sanity of this coupling, so what relief that Simon Caterson is here to brighten our Monday with a celebration of Cardinal Newman in The Australian, under the header Recognition of John Henry Newman's cardinal virtues ...
Of course you could just read the Catholic Encyclopedia's entry on John Henry Newman, and get the same ecstatic effect.
Caterson does spend a few moments contemplating the bizarreness of the Catholic church hunting around for a second miracle, so it can confer sainthood on one of its 'most contentious and complex members.'
He mentions Newman's age of conversion, his hearty public life as controversialist, his belief in the laity being involved in church affairs, and his lack of enthusiasm for the quaint notion of papal infallibility.
Digging around for Newman's saintly virtues occupies Caterson in the same way as the Vatican is currently hunting for that second miracle, and he settles on a couple.
The first is that Newman is a great prose writer, though truth to tell, apart from specialists, the most likely path to his scribbles these days is Elgar's mounting of his The Dream of Gerontius (though that's also a relative rarity in the concert hall, with it last turning up in Sydney in November 2008 - here as a pdf).
The second is his work as an educationist:
Moreover the importance of Newman's thought in the secular world is cemented by his idea of the university as inclusive rather than exclusive, and as a place where the student's intellect is developed rather than simply a degree factory or research facility.

A university, Newman believed, should be more than the sum of its parts. "The educated mind may be said to be in a certain sense religious," he wrote.

Loyal Catholics, in other words, keep their mouths shut.
If he had any bones left to roll, Newman would be rolling in his grave.
Benedict's problem is that Newman's emphasis on conscience, and the authority of the faithful, can be extended to a range of contemporary issues, besides contraception: human embryonic stem cell experiments, homosexuality, divorce, same-sex unions, and the ordination of women. Newman's views thus stand in need of major papal revision if they are not to offer comfort to the Catholic liberals and progressives.
Go libruls.
Time for an Orwellian reflection, and a dollar in the Orwellian swear jar:
Thoughts are fleeting glimpses
Of the future or the past
They lock ideas in a bottle
It's time to break the glass
Hiding out in the daytime
Crawling through the night
Keeping out of danger
Just trying to find the light
Thought police
They will put you under
The thought police
They will take you in
The thought police
They will clean your mind out
The thought police
You can never win
(Below: and now a snap of the happy couple. Careful! No touching below the shoulder). 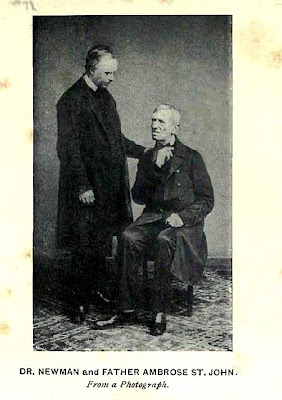