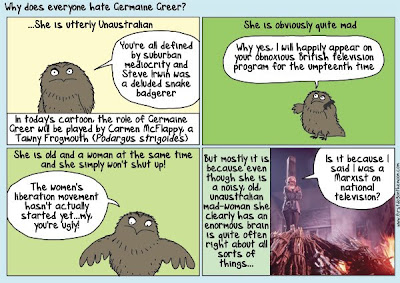 If Greer is the pin-up girl for her beliefs, it's not surprising that millions of women have chosen, and will continue to choose, a very different path.
Put it another way:
Albrechtsen says a lot of tosh. A sexy, sassy young woman can get away with it when people look more than they listen. Now older, not even a sharp, articulate tongue can save her from the fact she speaks no more for Australian women -- or any women -- than Barry McKenzie speaks for Australian men.
Albrechtsen is entitled to her shifting positions and failed endeavours, but having lost her interest in Jean-Jacques Rassial, she is now the killjoy spoiling everyone else's fun.

If Albrechtsen is the pin-up girl for her right wing beliefs, it's not surprising that millions of women have chosen, and will continue to choose, a very different path.
Well an opinion's an opinion, and here at loon pond, we don't have much interest in Greer, but we have even less interest in Nowra and Albrechtsen. The sudden ferocity and viciousness of their attacks on Greer make us think we've missed something, and that there must still be some threatening life and juice in the old dame and her ideas, even if she's not above a bit of tranny bashing.
It seems as if Greer's worst crimes involve her ongoing participation in televisual events:
Witness Greer's eager participation in those crass capitalist by-products, Big Brother UK, Big Brother's Little Brother and Big Brother's Big Mouth. Now famous for being famous, her thirst for celebrity far outstrips her influence as feminist. In a way, Greer has become the intellectual version of Paris Hilton.

Never mind that Greer has always been a media slut, a Cambridge Footlights type, who hung around with Private Eye and Oz, and posed nude for same, and edited Suck, and even did a comedy show with Kenny Everett and Jonathan Routh. She's been appalling and shocking the bourgeoisie since way back when (here), and ain't it jolly that the petit bourgeosie of the Albrechtsen and Nowra kind can still manage to be shocked. Vive épater le bourgeois(and more on Greer here).

I suspect that the real bitterness in Albrechtsen is that Greer can do her like a dinner, because Greer doesn't give a flying fuck, while Albrechtsen always shows up as a prissy, nervous, slightly inept and hectoring performer in front of a camera.
Not to worry. If you want an example of bitter, grudging, carping, personally spiteful writing, look no further than Albrechtsen, as she seeks to become a visionary intellectual celebrity by writing how Greer has become Paris Hilton. I suppose credit where credit is due, at least she didn't compare her to Lara Bingle.
But once again The Australian steps up to the plate, and shows why its columnists are the worst in Australia, thereby proving that Greer got one thing right in her pre-show grumbles. Let's face it, if Albrechtsen didn't have Greer to write about, she'd have had to invent her, as a way of avoiding her scribbles reverting to the usual tedious, tiresome, predictable, repetitious rants about right wing memes. Sadly, Albrechtsen doesn't have the imagination to invent Greer, so thank the lord the lord did.
Meanwhile, as we love to say: Think. Again.
And now for some fun, a quote from Kenneth Tynan on a meeting with Greer:
..Dinner at Drones with (among others) Germaine. She brings a nice little Australian girlfriend named Margaret. I congratulate Germaine on the nude picture of her in Suck which depicts her sitting facing the camera with legs apart and drawn up round her head like a wreath. I tell her (truthfully) that it turned me on far more than full frontals usually do. Germaine is prettily pleased, and bridles like an Edwardian miss whose portrait by Sargent is being praised. 'Did you like my cunt?' she says. 'I certainly did,' I say. 'And what about my arsehole?' 'I didn't notice it, darling.' 'Oh--it's there--rather large, I'm afraid--you can't miss it.' ... (London, 1973) (More quotes from sundry folk on Greer here)
(Below: shocking). 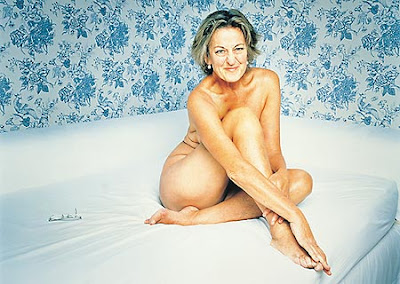