Ain't it grand to play the 'then and now' game so beloved of Tim Blair.
Of course, it's absurd and unfair, and based on the unseemly proposition that someone can't change their opinions in the face of convincing evidence.
Still, the temptations it offers are irresistible. Here's Miranda the Devine under the header Planet doomsayers need a cold shower back in April when she was celebrating dissident scientist Ian Plimer:
Such independent scientific dissenters have been demonised, their evidence marginalised, as climate change has become a quasi-religious belief. But you cannot stop one side from debating what is the biggest policy decision of our era.
Back then, she was keen to establish that not one Australian had been killed by climate change, and that anything we did would be futile and wouldn't change anything anyway, so why do it.
Even further back, in November 2008, under the header Beware the church of climate alarm, she was doing her level best to defend the honor of Vaclav Klaus:
... the real fear driving climate alarmists wild is that a more rational approach to the fundamentalist religion of global warming may be in the ascendancy - whether in the parliamentary offices of the world's largest trading bloc or in the living rooms of Blacktown.

Back then, creationists and climate alarmists were birds of a feather, full of religious zeal, inclined to become quite vicious and irrational (or so said Ian Plimer with her full approval), determined to peddle their shrill lies, even as ordinary folk began to suspect the zealotry and one-sidedness of the debate, and took noble steps to discover the real truth about creationists and climate alarmists.
So what's new? Well it's October, spring has sprung, Malcolm Turnbull is still the hapless man in the middle of an ongoing ETS climate change war within his party, and in Fine feathered factional friends, Miranda the Devine is chiding him for being a bit of a curmudgeon, inclined to create a false dichotomy on which his future now rests:
... the fact is that you can articulate a position on climate change that does not dispute man's contribution without buying into a complicated ETS, which benefits global financiers but has doubtful value for the environment. You don't have to be a climate sceptic to oppose a new stealth tax on Australians before we even know what the rest of the world plans.
Come again? You can articulate a position on climate change that doesn't dispute the zealotry and religous zeal of climate change fundamentalists, when climate change is completely unproven, hasn't killed a single Australian, and about which we've wasted endless hours of needless debate, about what we should do, when it's patently clear we should do nothing at all?
Surely she can't mean there's no point disputing man's contribution (as usual women are too feeble to contribute anything)?
Poor old Malcolm in the middle, with Miranda the Devine and Wilson Tuckey as bedfellows. No wonder he spat the dummy, trying to stop the Liberal party from disappearing up its own fundamentalism in the manner of American Republicans.
Devine is of course in the ratbag right camp, and by that we might take as a key example, David Clarke, whose shenanigans in the state Liberal party of NSW have routinely helped the state Libs snatch defeat from victory, as an incompetent NSW Labor government goes about the business of ruining the state.
About the only reason the Liberals haven't got back in has been the festering feuding, and the desire on the part of the extreme right to take the state Liberals further to the right, when they just needed to convince enough voters that what they really cared about was being a centrist party intent on managing the state better than the hopeless Labor tribe.
Naturally the Devine is in favour of David Clarke, contrasting him to federal MP Alex Hawke:
Hawke, 32, was once a protege of the upper house Liberal MP David Clarke, the putative leader of the traditional right faction. Clarke is unfairly maligned as a sinister religious extremist because he is socially conservative, a fan of John Howard, goes to Mass on Sundays and is married to a member of the Catholic organisation, Opus Dei. He and Hawke had surfed the wave of Howard conservatism, sweeping away two decades of control by the soft left wing of the party, and in 2007 he helped Hawke win the safe north-west Sydney seat of Mitchell.
Opus Dei? That'll do me for sinister, and no, I'm not abusing left handers. Now read on:

But with Clarke and his supporters unpalatable to the federal and state Liberal leadership, Hawke must have seen his political future as brighter without the baggage of his former boss. So he has embarked since October on a systematic power grab to oust Clarke at his next pre-selection, say Clarke's allies.

Well as we used to like to say in the Catholic church, thank the lord for that. The sooner that Clarke is ousted, and the sooner that Miranda the Devine and what she calls the John Howard conservatives or 'traditional right' are disappointed, the sooner state Liberals will have a go at running NSW, and the better Malcolm Turnbull's chances will be in the federal sphere.
You don't win the game by appearing to head off to the loony left (Mark Latham) or the loony right. You head towards the centre, and talk about stability and unity and moving forward into the future (as if we had a choice, time working the way it does), and then once in power you can go as loony as you like.
The factional brawling going on at the moment might be ugly, but it's necessary if the Liberals want to reclaim the centre and the swinging voter from Chairman Rudd, who got to power by pretending he was John Howard with a nerdish soft core caramel centre.
The more the Devine moans about the corrosive Hawke faction, and berates Turnbull, and talks about the outbreaks of undemocratic behaviour in the supposed party of freedom, you have to think that a little brawl at a Young Liberals party meeting is a promising sign.
Because the current situation for Malcolm Turnbull is that he can't articulate a coherent, sensible position on climate change, which doesn't dispute man's contribution, without buying into the whacky world of the zealots, fundamentalists and true believers, as exemplified by Miranda the Devine, and Wilson 'Iron Bar' Tuckey.
When you can have a gherkin like Nationals Senator Ron Boswell denying the coalition took a carbon trading scheme to the electorate as part of the last election campaign, you can imagine the difficulties poor old Malcolm and shadow minister Macfarlane face rounding up the truculent sceptics and hostile unbelievers and deniers.
This is Alice in wonderland territory, a bit like trying to decipher the runes on what Miranda the Devine actually thinks about the matter of climate change.
Well you don't have to worry about the recalcitrant Tim Blair, who in Malcolm seizes muddle ground, continues his holy war with a fine example of zealotry dressed up as satire:

Opposition Leader Malcolm Turnbull this week stood up to rebels within the Liberal Party and demanded they demonstrate their complete and unconditional support.

For the Labor Government.
Poor Malcolm. With friends like Tim and Miranda, you never have to worry about running short of enemies ...
(Below: a couple of cartoons from the NMA's pick of the best cartoons of 2008, here. Lord knows the NMA building and physical exhibitions are a mess, perhaps they'll do better as an online repository, as first proposed in the Keating years before John Howard decided to leave his appalling architectural taste to history. The first is by John Spooner, the second by David Pope). 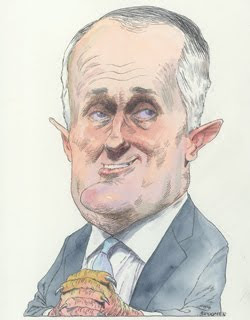 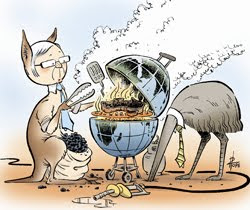