Miranda the Devine and Mark Day re-dux, and the price of masochism

Like a dog returning to the results of its emesis, it's hard not to take another look at Miranda the Devine's piece of trolling under the header Roads are for cars, not Lyrca louts.
Now if you clicked through on that link, you've played the game and rewarded the Devine for her trolling, an extended piece of emotional hysteria about how roads are for cars, and everyone else can bugger off.
Enough said about that bit of nonsense, but what's remarkable is that the Devine has turned her trolling into a four hundred and fifty seven comment rant. She's provoked people to either stir the pot with her - and upset possum bicyclists - or persuaded people to rail against her strident ratbaggery.
In conventional journalist terms, this is a success. Never worry about printing the controversy, provided it whips up a storm.
But what does it say about the masochists who get caught in the game, vent their rage, and thereby reward both the Herald's editorial policies and the Devine's rants?
Well there's a mug born every minute, and if you favor the catharsis theory in drama and life they might well be happy with the experience. Having purged or relieved pent-up emotions by beating up on the piñata Devine - a piñata that keeps on giving useless opinions and irrational illogical rants - they can then move on to a productive day, smiling at their workmates and cheerfully delivering the goods to their customers.
It's a kind of cosmic communal therapy, and the only ones to suffer are the cyclists at the centre of the Devine's ill-mannered, and yes it must be said, stupid, rant.
But what about those who don't follow the catharsis theory and find themselves disturbed, troubled, in an emotionally unsatisfying way? Not relieved by writing in a short par denouncing the Devine as a loon?
Are there enough masochists in the world who might want to pay to lacerate themselves in what was once the traditional approach to publishing? I can remember one editor telling me how pleased he was with any response - it didn't matter if it was good, bad, illiterate, pleased or mad - it was a sign that we were in touch with our readership. And in the old days one letter to the editor was reckoned to be an indicator of anywhere between one hundred and one thousand actively silent readers (though I never quite understood the notion of active silence, I think it might have meant actively engaged but silent).
But how will this kind of shit-stirring when publishers turn around and demand payment for online content? When - if you're a cyclist for example - you can read the Devine for free at the moment, then go off and vent in your own forum, without rewarding the original publisher further, because they have a free community of like minds - as dedicated Sydney cyclists did by trotting off to Sydney Cyclist.
There they brooded as a pack. Turn the other cheek, write a cooly rational response, ignore it all together, cancel their subscription? What to do to express the outrage?
How does angering or irritating a significant part of your customer base amount to a business model? Is it just a way of providing water cooler chatter, or is it a significant disincentive to purchase?
How does it fit with Mark Day's blithe spirit suggestions on how traditional media might reform themselves to attract an audience large enough to sustain their business model?
... I gather the aim is to create sites that appeal to various user groups, built in the style of social networks. Some will be aimed at youth markets, others at the so-called working families, others at upmarket, culturally influenced, older audiences. Some will be defined by geography (that is, city or regionally oriented); others by specific interests.
They will be hybrid sites with open-access for all the breaking news that is currently provided free today. It won’t cost you to learn of a plane crash, a government initiative, or a sporting result.

Beyond the open pages will be a raft of services and specialised information. A clue may be taken from the launch last week of Times Plus in Britain—a site majoring in culture and travel initiatives, where subscribers to The Times and Sunday Times will have automatic access, and non-subscribers will be asked to pay pound stg. 50 ($88.65) a year to join the club. On offer are travel deals, tickets to film and theatre previews, discount book offers, cross-promotional offers for pay-TV services, upgrades on airlines, and so on. I figure it’s no coincidence that many of the offers have a listed value of pound stg. 50—the same as the joining fee.

As well as the value-added shopping aspects of the site, there’s a blog facility for the exchange of views and other user input. It’s a virtual community designed for the typical Times reader—upmarket, well-off, older folk with the time and money to fund a peripatetic, cultural lifestyle.

Whoever would have thought it? This model is not unlike a newspaper itself. Newspapers have always been aimed at specific markets, whether they be defined by geography, demographic or market segment.

A newspaper contains breaking news, exclusive news, sport, finance, fashion, comics, crosswords, quizzes, TV listings and vast amounts of service information in the form of either editorial or advertising. Collectively, this amounts to a product some of us consider to have sufficient value to induce us to part with our money. (here).

Well would you want to have Miranda the Devine, Janet Albrechtsen, Tim Blair and Andrew Bolt as part of your extended social network, and pay for the pleasure of self-abuse? Not just link them to your Facebook page, but pay for the pleasure of having them in your community?
It's an interesting question, and I don't pretend to have the answers for others, but with the latest news that the slow spiral downwards of newspapers in the United States is starting to resemble a crocodile death roll, somebody better think of something soon.
Here's the decline in circulation of the top 25 daily newspapers in the United States.
Here's Megan McArdle in the Atlantic announcing the end of the newspaper business full stop.
Here's the Washington Post getting agitated about it.
Here's a newspaper death watch, and now comes the news that the only newspaper to pick up its circulation a tad has decided to end its Boston office, and thereby cut nine jobs. Yep even the Wall Street Journal and its paid model is feeling the heat.
Google 'decline of newspapers' and you can get more hits than grains of rice accompanying a decent curry.
It makes Mark Day's latest column, about how cunning Rupert Murdoch is by letting others jump first into demanding payment for content (Newsday bets on internet users paying for local news) even more poignant.
Well who knows how it will turn out. I can't decipher the runes, and I'd rather go to the dentist for some root canal therapy than willingly pay to be trolled by Miranda the Devine, so good luck to the Herald in its mission to get a significant part of its readership base agitated, infuriated, upset and turned off.
Here at loon pond, we're thinking of opening a nice little dungeon for liberal masochists where they can pay a fortune to have the crap and their liberal opinions beaten out of them. Could be a nice little earner ... 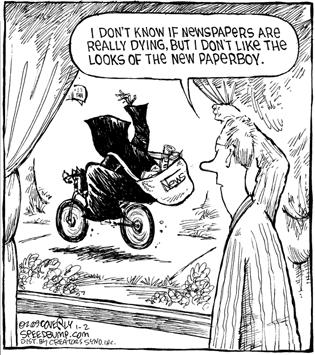 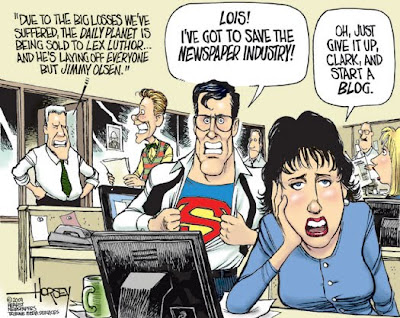