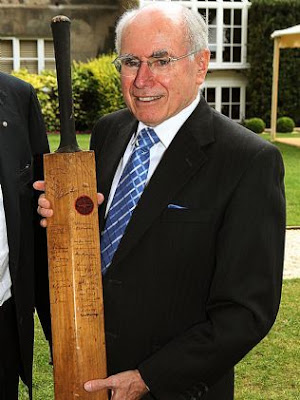 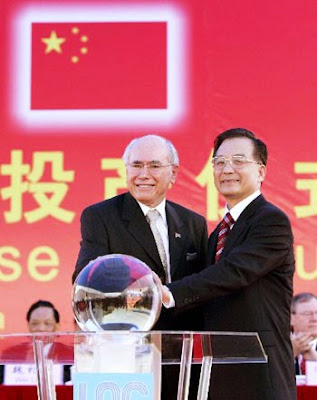 (Above: John Howard showing how a love of Don Bradman's bat should not interfere with a balanced relationship with China, no matter their love of googlies).
Thrill seekers and carefree gamblers have once again gathered to check the results of the weekly Gerard Henderon John Howard competition, and in Rudd's attitude to China gets the balance just about right, Henderson doesn't disappoint.
He might shock - consider the column's title - but he doesn't disappoint:
First mention of John Howard in the column: third paragraph.
Number of mentions of John Howard in total: five.
Punters who like short odds favorites should have done well on the tote.
As for the title, it's easily explained. Kevin Rudd is doing well in relation to China because he is John Howard in drag:
Like Howard, Rudd wants to develop the best possible relationship between Australia and China. Howard was part of the anti-communist tradition in Australia. But from the time of his first visit to China in 1985, he understood the importance of the relationship between the two nations. By this time Mao Zedong was dead for almost a decade and it was clear China had renounced that part of Mao's legacy which had resulted in the deaths of millions during the forced famine termed the Great Leap Forward of the late 1950s and the killings and incarcerations that were a part of the disastrous Cultural Revolution which began in the mid-1960s.
Golly, and there was silly old David Burchell only a few days ago brooding about Chairman Mao and the dead millions, in Lest we forget, China's party killed millions. (We look forward to similar columns brooding about indigenous Australians, native Americans, the Germans, the Japanese treatment of the Chinese in World War 11, and the shock that John Howard invited a Chinese leader to speak to an Australian parliament).

But back to Henderson's revelations. Of course, Rudd is different to Howard:
Rudd comes from a different generation than Howard.
But that's just so he can remain the same:
Unlike many of his contemporaries, as a student Rudd never embraced the "whateverist" school of thought of many of the China scholars of his day - namely, the tendency to support whatever was being said or done by the rulers in Beijing at any particular time. Rather, Rudd, influenced by Australian National University academic Pierre Ryckmans (who wrote on China under the pseudonym Simon Leys), studied the Chinese democracy movement with particular attention to the role of dissident Wei Jingsheng. Rudd met Wei in Canberra in 1999.
The result is that Rudd has managed to offend the likes of Queensland mining executive Clive Palmer, who thinks he's too tough on China, and Greens senator Sarah Hanson-Young for being too soft, and for not meeting the Dalai Lama when he turns up in Australia in December.
Rudd is indeed the very model of a modern balanced John Howard politician. Forget all this stuff about Rudd being a fluent Mandarin speaker, unlike John Howard. Just like John Howard, he's attempted to strike a proper balance between his concern for human rights in China and his understanding of the need for a friendly relationship between Australian and Chinese leaders.
Yep, everything is hunky dory in the garden of delights, and we're even making compelling films about China using Australian government money!
Australia's one-time infatuation with Mao's China is a thing of the past - as is evident in Bruce Beresford's fine film Mao's Last Dancer.
Yep, all is forgiven, all you Howard hating film-makers flourishing your government funded films in our faces. No need to hate all the one time haters, or mourn your lost infatuations.

It should not be replaced by passion born of China's wealth and the business and cultural possibilities this provides.

So far, despite criticism from the likes of Palmer and Hanson-Young, Rudd has got Australia's China policy about right.
Like Woody Allen. We'll just take their money and run.
Ah yes, was it the same Gerard Henderson who only in August wrote under the header No need to be concerned about hurting China's feelings?
There is only one significant problem in the present Australia-China relationship: the incarceration in China of the Rio Tinto executive and Australian citizen Stern Hu ... Australia should treat China the same way we treat nations with whom we have good relations. This means not forgetting Stern Hu.
Well I scanned the latest column several times, as a major assessment of the current state of play with China, and I have to confess I couldn't find a mention of this man we should not forget.
Stern Hu?
Yes grasshopper, we have much to learn from John Howard's approach to the world, but if Gerard Henderson thinks you're turning into a fine John Howard, is it time to ring the alarm bells?
Well as the whateverists would say, whatever.
Meantime, we've arranged for Piers Akerman - who regularly finds reds under the bed, and in CSIRO projects - to be rushed to hospital, and lodged in intensive care, a result of the shock of reading Henderson's musings. Hopefully Akker Dakker won't find any reds under the bed in hospital, but you can't be too careful these days with all the socialized medicine doing the rounds. 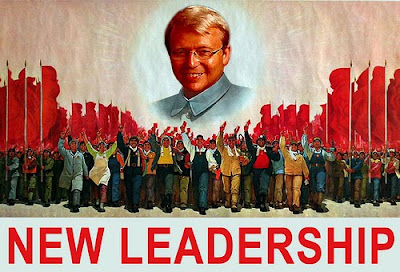 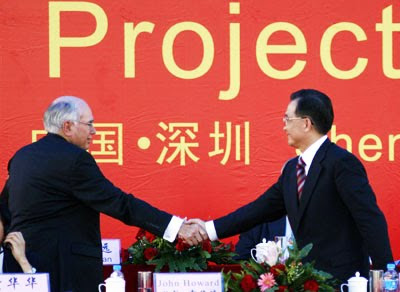